Asian drinks and snacks aren’t only tasty and rich in variety (and generally not as sweet as their Western counterparts!), but are also immensely fun to eat! Plus, whenever we catch up with friends, they always get fascinated by our favourite snacks' taste and always ask us for recommendations. This situation spawned the awareness that people want to try good snacks all the time and our favourites are usually the awesome choices to make. This lead to the birth of the WeRateSnacks! 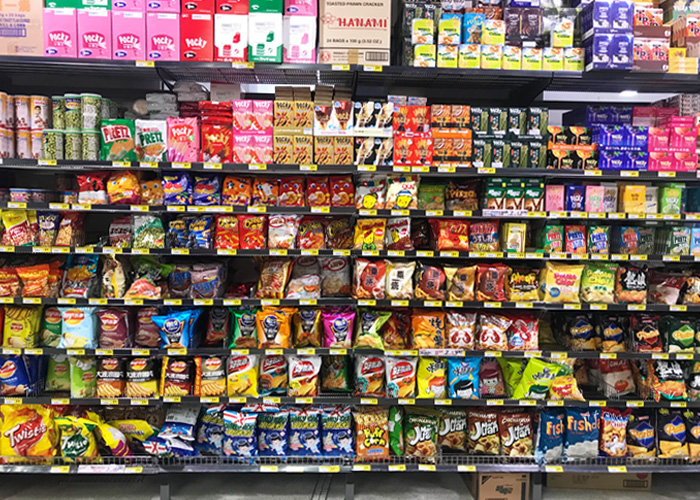 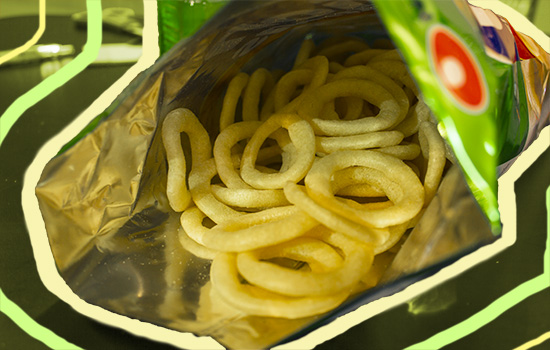 Onion flavour is really subtle and smells nice. It's sweet at first but then the savoury saltiness kicks in. The shape of the ring is fun and thus makes the eating experience fun. It's crunchy but foamy and airy enough to melt in your mouth after chewing for a bit. A bit messy, small crumbs and flavouring/salt will fall off. One of the cheaper snacks.
Anita: ★★★✩✩

The snack was fully filled up in the packet despite its cheap price. Very crunchy so that you can even drool by hearing the eating sound. Has a scent of onion flavor and very savoury. The filling mass was big so you can share between two as well.
Michelle: ★★★✩✩ 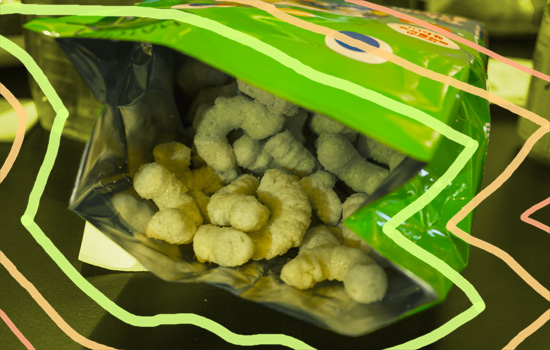 Very sweet. The texture was amazing, it was crunchy but softened really fast like a fairy floss with sugar. The price is high but the flavour would make me come back for it. Also the shape and flavour was very close to what's been described on the package. Once you tasted this the other snacks tasted less sweet.
Michelle: ★★★★✩

This one smelled amazing opening it, and tasted just as good. The individual snack itself just melts into your bite and into your mouth, as it's so airy but dense at the same time, no air bubbles. Seems to be coated in honey, so first taste is sweetness and then you bite into the subtle matcha flavour. Doesn't get boring, the flavour is new with every bite. The downfall was that this was the most expensive snack but it's so good it might be worth it
Anita: ★★★★✩ 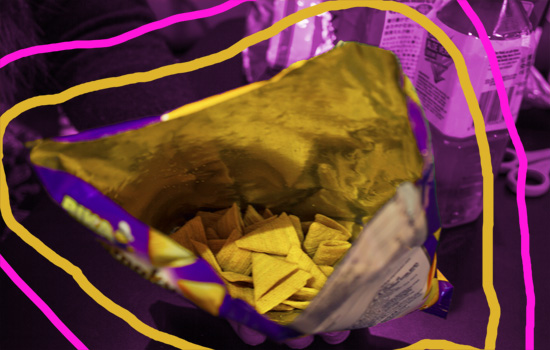 The packet wasn't even half filled!! It's the ‘same’ size as the Matcha snack but feels a lot less. Probably explains the cheap pricetag. The flavour though is pretty nice, not too strong, and a little bit tangy/spicy aftertastr as you swallow. Hard and very crunchy, the shape probably helps this. It's nice and crisp, and dense, not airy. The bbq flavour is clear
Anita: ★★★✩✩

It almost felt like your mum called you to have dinner but once you got to the dining room there was just the bowl of rice and that’s it. Flavour was good in aspect of having smoky flavour; so if you like smoky bbq this would be a good option. Very crunchy and hardly likely to get softened. Price was very cheap to the point that if you begged the money on the street you can get the money in like a minute.
Michelle: ★★★✩✩ 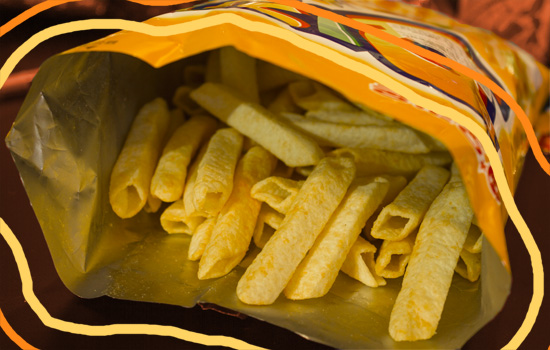 The snack was crunchy but it softened very fast. It tasted like you grabbed a normal potato chip from KFC, made the outside more crunchy and emptied inner area. The price was very high so wouldn’t be an option if you were very poor.
Michelle: ★★★✩✩

T he actual chip itself is very soft! Almost a foam like consistency. The cheese flavour is somewhat sweet, not overwhelming. The chip’s hollow shape is interesting and almost fun to eat. Identical to packaging image and size. Price is very high. There are other flavours available which we assume are more popular. It's nice but gets boring fast. not worth the high price.
Anita: ★★✩✩✩ 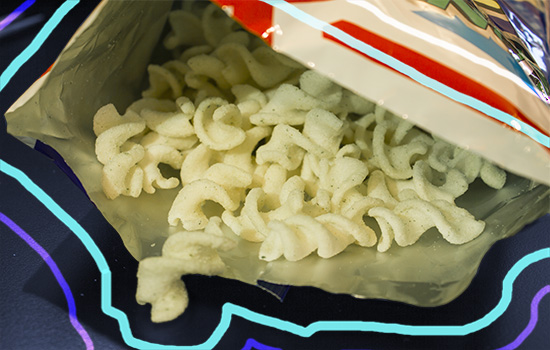 Initally suprised because the chips were subtlely sweet! A lot smaller than I thought. No seaweed flakes like in packaging image. Once you bite into it the savoury, tangy flavour hits but its overall pretty plain in flavour. Aftertaste is tangy; makes for a nice mindless snack. Crunchy but not too crunchy so that it hurts your gums, very nice.
Anita: ★★★✩✩

Crunchy. Had no flavour when I tried yet could still taste the sense of potato. Appearance was very similar to the photo but did not have green salt on the top. Price was decent. If you are looking for something to eat as a light snack, this would be good to start with.
Michelle: ★★★✩✩

ALOE VERA DRINK: with a hint of honey 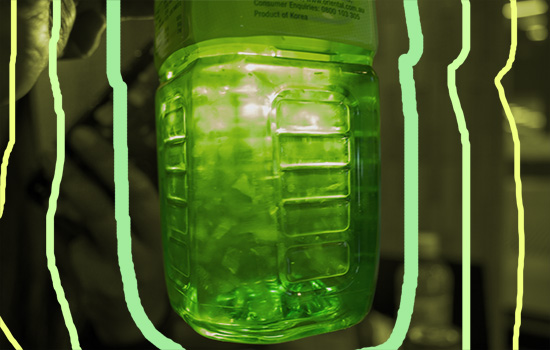 The liquid itself is rather thick consistency, its so nice and sweet and the aloe makes for an interesting texture as well as a flavour pop! The aloe jelly is soft and squishy and makes you chew a bit. The honey probably makes the consistency thicker. Is a good reasonable price as well, very worth. Its so simple and so good defs a favourite. Bottle is very sturdy!
Anita: ★★★★★

Very sweet with chewy aloe to give yourself an enjoyment of eating while drinking. Very easy to swallow although you may have aloe inside. Cheap price and available in many different flavors like lychee. Good in both chilled and not chilled.
Michelle: ★★★★★ 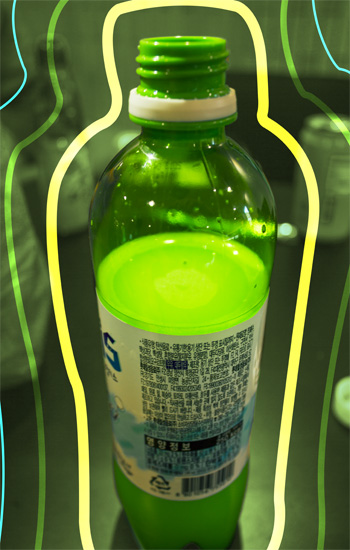 Fizzy but yet gentle and subtle compared to coke fizzy. Taste like mixture of lemonade and a hint of milk/yakult. Bottle in a good shape and grip; and light as well. The drink was at a decent price so definitely would come back for this
Michelle: ★★★★✩

The fizz is so subtle! Nice muted fizz that slides onto your tongue. The liquid consistency is thicker than regular soft drink, living up to the 'milk' name. Taste a tiny bit like a lemonade yakult!! Is nice and sweet but not overpowering, a subtle drink. Loses the fizz pretty fast and gets a bit flat
Anita: ★★★★✩ 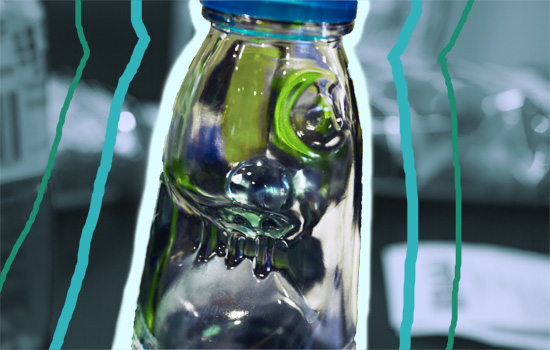 Very novel item, the bottle is a fun shape and it's an interesting process to open. The inital smell itself was very sweet, and it's a very refreshing drink (ours wasnt even chilled). The bubbles taste really nice. The bottle shape has the marble in it but the top is a bit hard to drink from, as there's no spout to close your lips onto. The original flavour is reminiscent of a muted lemonade flavour, the fizz is nice and gentle, not as fizzy as western sodas. A bit pricey.
Anita: ★★★✩✩

The way to open the bottle was a kind of entertainment; children would love this. Refreshing sweetness hits you straight after you open the bottle. Taste is very fizzy and sweet. However, depending on where you are opening, it is easy to spill. Also the glass bottle was heavy and its opening was harder for people to drink. Very unique taste but pricy.
Michelle: ★★★✩✩